CSX Transportation has had a busy start to July 2021, particularly, regarding its acquisitions of Pan Am Railways Inc., and Quality Carriers Inc.

Since CSX’s announcement regarding their acquisition of the Pan Am Railway (PAR) on November 20, 2020, CSX has had to work through several regulatory obstacles. The US Surface Transportation Board (STB) reviewed previous applications submitted by CSX and deemed them incomplete and required more specific clarifications to address competitiveness.

The deal in question involves CSX’s acquisition of PAR’s 1,200-mile operational network, plus its 50-50 interest in the 600-mile Pan Am Southern (PAS) with Norfolk Southern (NS). In a November 2020 filing with the STB, NS voiced their opposition to the merger, indicating that their joint control of PAS and PAR was intended to strengthen competition with CSX in New England. Since then, however, CSX and NS reached an agreement whereby both Class I carriers would retain their 50% ownership and PAS would be operated by the short line conglomerate Genesee & Wyoming (G&W). G&W will operate PAS as the Berkshire & Eastern Railway (BERK). In a statement, CSX said, “The selection of a G&W affiliate is based upon our desire to maintain competition and enhance rail service in the New England market. G&W’s existing presence, relationships, and experience will greatly assist the transition.”

In April of 2021, CSX submitted a new application that was once again turned down by the STB, who indicated CSX’s market analysis needed to reveal the impact of the acquisitions on both inter and intramodal transportation. Additional objections came from New England based short line operators, the passenger rail service Amtrak, and state and local planning agencies. However, CSX’s President and Chief Executive Officer James M. Foote expressed his optimism that the acquisition would provide the PAR’s customers with a national reach and reinvestment in the rail infrastructure, as well as more environmentally sound operations.

“We are thrilled to welcome the Quality Carriers team to CSX,” said James M. Foote. “We strive to provide chemical producers and shippers with the most efficient, cost-effective transportation services possible. By combining CSX’s and Quality Carriers’ capabilities, we can deliver an unparalleled multimodal solution that will generate substantial value for our customers.”

CSX’s acquisition plans for PAR makes sense from a modal standpoint, but many are still wondering exactly how CSX will market the CSX-QC combination. The most obvious scenario involves CSX combining their rail with QC’s bulk trucking services and utilizing CSX’s TRANSFLO™ bulk terminal network; this service performs transloading and material handling between rail and truck at 40 locations in the eastern US and Canada. Unfortunately, the likelihood of CSX “bundling” and controlling the truckload portion of the movement would be limiting to many shippers and would remove the competitiveness of the truckload portion of the movement.

In this world, mergers and acquisitions traditionally mean less options; rail shippers with less options know exactly what to expect in the future. 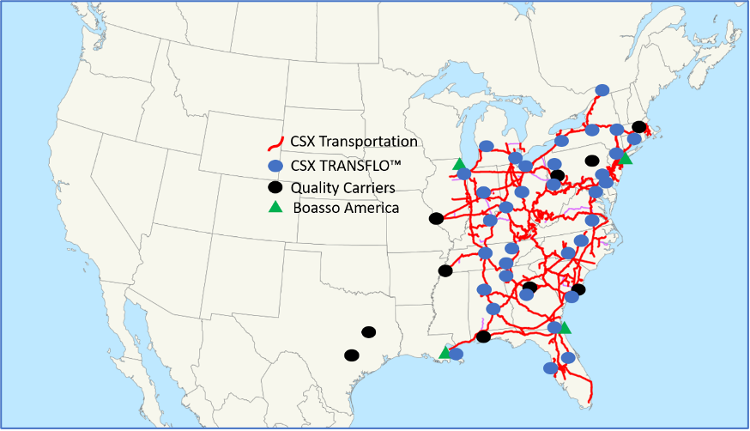