The National Industrial Transportation League (NITL) is the nation’s oldest and largest freight transportation association. Since 1907, the NITL has represented the shipping public in regulatory matters involving all modes of transportation. It was therefore a given that the Canadian National (CN) and Canadian Pacific (CP) sought the NITL’s support of their respective merger plans involving the Kansas City Southern (KCS).

In a news release by the NITL on June 23rd, they advised that the CN asked them for their support of the proposed CN-KCS merger and Voting Trust. Similarly, the CP has asked the NITL to oppose the CN Voting Trust and to endorse their proposed CP-KCS merger.

The NITL stated that it, “has a broad and diverse membership and a number of its rail shipper members are opposed to any future rail mergers. However, it is generally recognized that there is a high probability that a merger involving the KCS will occur, with either CN, CP, or another party (including possible private equity suitors) as the acquiring entity. Based on this reality, NITL strongly favors any merger involving KCS to be reviewed by the Surface Transportation Board (STB) under its merger rules adopted in 2001, which require the applicants to demonstrate how the merger would “enhance competition” and “improve service.”

The NITL’s Rail Transportation Committee has developed the following actions that they feel will enhance competition within the mode of rail and positively effect overall rail service regardless of a CN-KCS or CP-KCS merger.

Post-merger, the CN/CP will agree to issue Rule-11 tariff rates applicable to all open gateways/interchange and to include rates in a contract if requested by the shipper. The rates would be published as mileage scale rates and would be differentiated by car ownership, commodity, and equipment type.

Pre-voting trust, the KCS switching scheduled would be locked into for a period of 10 years. Switching performance will be monitored and submitted to the STB throughout the voting trust and merger review period.

Following the STB’s approval of the CN/CP voting trust, the NITL reserves the right to seek additional merger conditions to assist in negative impact to its members.

It is our opinion that NITL has done an excellent job presenting various conditions that will help to enhance and/or maintain competition and overall service. For more information on The National Industrial Transportation League, you can visit their website at: https://www.nitl.org/

On April 23rd, the STB decided that it would review the proposed CP-KCS merger under the waiver provisions it granted the KCS in 2001. This waiver was enacted because a merger of a Class I carrier with the KCS would not involve the same risks as a merger between two larger carriers. The CN’s proposal on the other hand will be subject to the stricter merger rules. This merger ruling places a more significant weight of public opinion on competition and maintaining a stable and balance transportation network for the CN.

The other issue that the STB must consider is both the CP and CN’s use of a voting trust to transact the acquisition, which would allow KCS shareholders to receive the financial benefits prior to the new company being merged operationally. A voting trust is a vehicle by which the buyer of an asset can immediately pay the shareholders prior to regulators making an approval. During the period between the acquisition and regulatory approval, the two companies would operate independently. The STB must first approve or disapprove the use of the voting trust for both CP and CN. 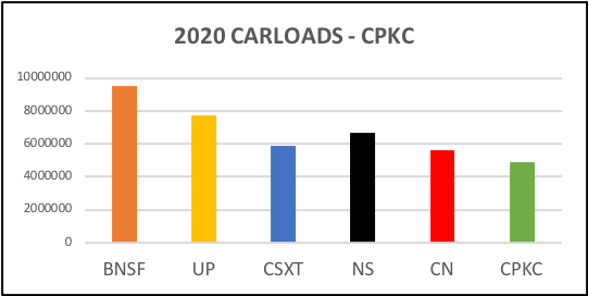 On March 21st, The Canadian Pacific Railway (CP) and Kansas City Southern (KCS) announced that both Class I carriers had entered into an agreement to merge. The initial condition of the merger stipulates that the CP would acquire KCS stock amounting to $29 billion and would assume the KCS’s outstanding debt estimated to be approximately $3.8 billion. As a combined rail network, the proposed new name would become known as the Canadian Pacific Kansas City or CPKC.

Tuesday, April 20th the Canadian National (CN) offered to acquire the Kansas City Southern (KCS) for $33.7 billion, setting the stage for both of Canada’s class I carriers to faceoff for the KCS.

The CN’s offer represents a 34.8% premium over the CP’s March 21st offer. The KCS indicated that they will evaluate the CN’s offer, and if determined that it truly is a better offer, then the CP would be given the opportunity to submit a response.

May 13th the CN pledged to add more stock to their initial offer, as well as compensate the KCS for the $700 million breakup fee they would owe the CP.

CP Will Not Increase Bid

On May 20th, the CP released information indicating that they would not increase their $25 billion bid for the KCS in lieu of the CN $33 billion dollar offer. The CP’s announcement follows the CN pledge the previous week to add more stock to the deal along with compensating the KCS for the $700 million breakup fee that would be owed to the CP.

The CP’s CEO Keith Creel said on April 28th, “we don’t want a bidding war. It is not something that we’ll participate in, and ultimately, it’s a war that we would not win.” (Source: Transport Topics). The CP’s contention is that a CPKC merger is more likely to be approved by the Surface Transportation Board (STB). A CP-KCS merger would best meet the STB’s requirements of increased competitiveness and service considerations.

CN’s Ruest indicated that the CN and KCS have “highly complementary networks with limited overlap.” When analyzing both CN and CP’s network with the KCS, the CN does share a common area in the gulf with the KCS. As mentioned in our previous blog, the CPKC merger would essentially be an end-to-end consolidation that only shares Kansas City as one common connection or interchange. A CN-KCS network would have a total fourteen interchanges (IA-1, IL-5, LA-6, and MS-2).