Railroads will tell you they “price to the market.” But whose market is it, yours or theirs? How many times have you questioned the reasonableness of a rate? How do you currently compare the rate for one lane to the rate in another?

The railroads always strive to lower their Operating Ratio. This important metric, monitored closely by Wall Street, measures their efficiency through both decreasing total operating costs and increasing total revenue. Many cost-cutting efforts are underway, including the streamlining efforts of Precision Scheduled Railroading (PSR). To maximize their total revenue, the railroads focus on a different metric as they set their individual rates.

The RVC is one of the most important calculations in understanding rail pricing. RVCs can help you determine how the railroads compare rates, and consequently how they price. This ratio can be thought of as the inverse of the Operating Ratio, but for a single lane and is simply the railroad’s revenue divided by the operating cost for that lane.

Of course, when setting rates, carriers consider factors other than cost, including risk/liability, modal competition, and rail competition. They will estimate what the market will bear, and pricing managers often have a desired return for each commodity.
A railroad’s targeted profit level will often be based on what it currently obtains from other similar traffic. For example, if a railroad has existing rates for a given commodity that produce an RVC of 2.0, the carrier is likely to require that same return on a new rate request, especially if new traffic could displace existing business.

The railroads will strive to protect existing operating margins. When negotiating a rate, the railroad will consider how the traffic will affect their entire portfolio. Is it totally new volume, or does it displace other business? If a carrier is moving a commodity in one lane, and you request a rate for a new lane that would take volume away from their current business, they are likely to quote a rate to provide an equal or greater margin than they are receiving. This can be viewed as margin-plus pricing. Other factors such as traffic patterns and equipment utilization may also come into play.

RVCs provide quick and easy comparisons for railroads to determine rates, but they can also be comparison points for you. After you have used RVCs to understand your rates relative to the railroads’ costs, you can use them to benchmark your rail transportation costs relative to your competitors. 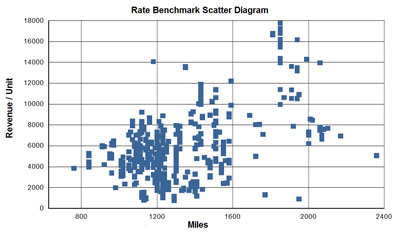 Rail rate benchmarking utilizes commodity specific yardsticks for evaluating rates. Variances from those yardsticks can give you valuable insight into where you have the most leverage to minimize your overall rail spend. Favorable variances may indicate market share growth opportunities, while unfavorable variances highlight areas in need of greater management attention. You do not have to gather this information yourself, either. The rate request tools in RSInet and cost analysis in Rail Impact organize this process and enable quick rate estimates.

You can also use sample freight bill data to make comparisons. The railroads are required to submit an annual sampling of their freight bills to the STB. The STB offers a public file of the data with confidential information removed. Railroads may mask contract rates, but not tariff rates. This data can provide useful benchmarks to negotiate better rail freight transportation rates depending upon the commodity and market size.

As you might expect, railroad RVCs tend to be higher when there is no competition in the lane. Unfortunately, over 70% of locations are served by only one carrier. It can be difficult to negotiate pricing in these situations. Once you have analyzed RVCs across your route, you will be able to see where your rail freight rates are out of line. If you are being significantly overcharged, it may be time to explore other options.

There are a few other options available, even in captive lanes. Consider using a transload facility to expand your options. Or, compare other modes, such as trucking or marine transport, where possible. Strategic investment in alternative routes can pay off in the long run.

Some shippers bundle their moves and ask railroads to bid on the entire package. Since rail rates are generally higher for captive locations and lower for competitive movements, it’s assumed that the overall railroad shipping rates will be lower. This also tends to simplify pricing, since it does not require analysis of individual lanes and moves. However, one railroad will probably control more of the route than another, and this carrier has the advantage in bundled pricing. Ultimately, the dominant carrier uses captive traffic to obtain more participation along competitive lanes. The largest railroads continuously drive up individual rates, while smaller carriers struggle to cover costs.

A more effective scenario is for shippers to use competitive traffic as leverage to secure better rail freight rates on their captive lanes. Evaluating current treatment by captive railroads can be a factor in determining which competing carriers provide the opportunity to bid on competitive lanes.

Another problem with bundling rates is that it enables rail carriers to include unreasonably high rail freight rates in the package. By separating and comparing individual railroad rates and possibly requiring them to be published in a tariff, the shipper retains the legal option to challenge them before the Surface Transportation Board.

Understanding railroad pricing can help you negotiate more effectively. In an environment with a significant amount of confidential contracts, comparing revenue-to-variable-cost ratios provides a way to evaluate rail rate reasonableness. Take a look at RSI’s Rail Impact software to understand RVCs and see where your rates rank.