The Surface and Transportation Board (STB) has scheduled a meeting for December 13th and 14th, 2022, to review the Union Pacific’s (UP) “substantial” use of embargoes to reduce rail congestion. At the hearing, Union Pacific will be represented by key management including their CEO, Lance Fritz.

As a result of their December 13-14 hearing with the Surface Transportation Board (STB), the Union Pacific Railroad (UP) has pushed the paused button on their use of embargoes to control congestion.

According to the UP’s CEO Lance Fritz, “We are taking a hard look at our use of congestion-related embargoes”, and that they’ll “facilitate a hard look, we are immediately pausing any additional embargoes under the pipeline inventory management program that we began in November”. The UP indicated that they will provide additional information in the coming days.

Even though the UP has not yet commented, it is the belief of others that the congestion problem originated in 2018 with their release of their “Unified Plan 2020”, an initiative to establish Precision Scheduled Railroading (PSR) practices. The key principles incorporated into the plan was to include:

One commonly hyped benefit of PSR is that this method will create a reduction in labor for the railroads. However, information provided by the STB indicates a history of labor attrition since the beginning of the UP’s Unified Plan. According to Richard Edelman, an attorney who represents the rail unions, “they (the UP) are lengthening train sizes that exceed infrastructure capacity, which is adding congestion, instead of adding workers to improve the service…the Class I freight rails may be hiring, but they are not retain existing workers so there is no net gain”.

What is an Embargo?

Per the Association of American Railroads, “an embargo is a temporary method of controlling traffic movements when in the judgment of the serving railroad threatens congestion, accumulation, or other interference with operations such as track, bridge or other physical impairments that warrant restrictions. Embargoes may contain a provision for a permit to provide a controlled movement of traffic to an embargoed destination”.

Embargoes are put in place to manage traffic when congestion or interference at certain locations requires controlled movements and limitations to keep things moving. For instance, if a rail switching facility finds itself constantly filled with snarled traffic, an embargo may be used to limit rail traffic enough to untangle the mess. Railroad staffing issues, weather events, track or bridge maintenance issues, and heavy rail traffic are major contributors in creating congestion.

The Union Pacific and Embargoes

The basis for the STB hearing comes from the UP’s significantly increasing issuance of embargoes over the past 12 months of 2022. According to the STB, “disruptions in the UP’s service levels have a significant detrimental impact on the supply chain and the nation’s economy”. The UP’s response is that the use of embargoes is the only tool that they can use to minimize congestion that results from excessive customer-controlled cars on their network. The UP argues that their significant geographic footprint, yards, shipper facilities, and blend of commodities makes them vulnerable to congestion. 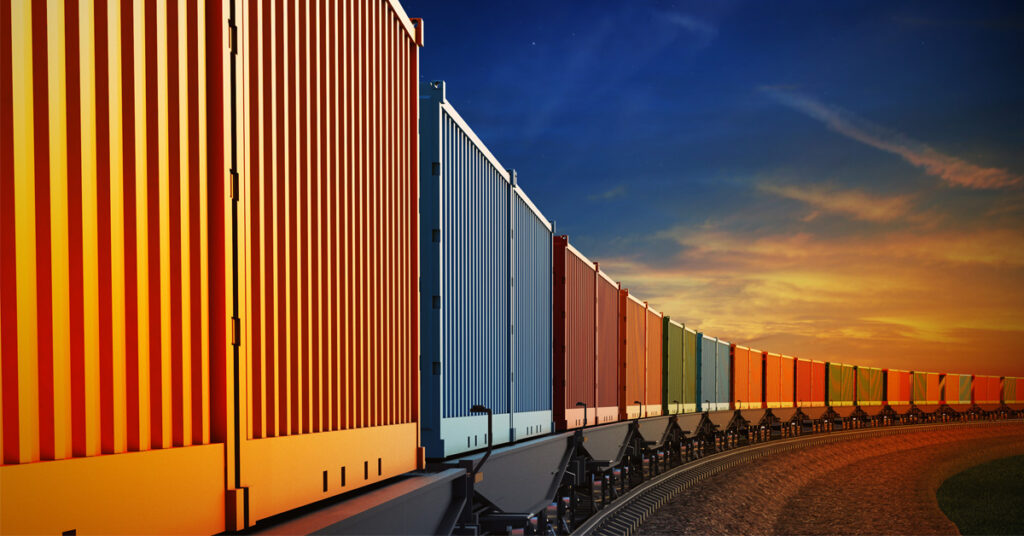 According to our Director of Customer Service, Gail Carlson, “the root cause for the congestions stems from the UP reducing their last mile switching service. We have seen situations where the UP has reduced the weekly switch service from 5 days to 1 day per week. Often, the single weekly switch is missed because of the crews running out of hours.” The UP simply does not have enough labor to support their overall level of business. “This is a challenge that all of the Class I railroads are experiencing, but the UP has extended the use of embargoes to force shippers into volume changes to accommodate the UP’s reduction in last-mile service.”

We performed a review of current Embargoes by Class I carrier based on “Congestion/Accumulation” (see below): 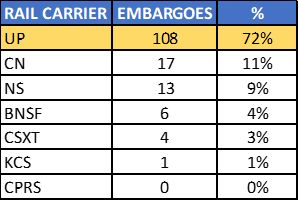 The UP’s 108 Embargoes represent 72% of the current total. Considering that the UP handles 27% of the nation’s carloads freight, it is clear to see that they may be taking advantage of them. This is the challenge for the STB to determine.

The hearing will be broadcast on the STB’s YouTube channel. 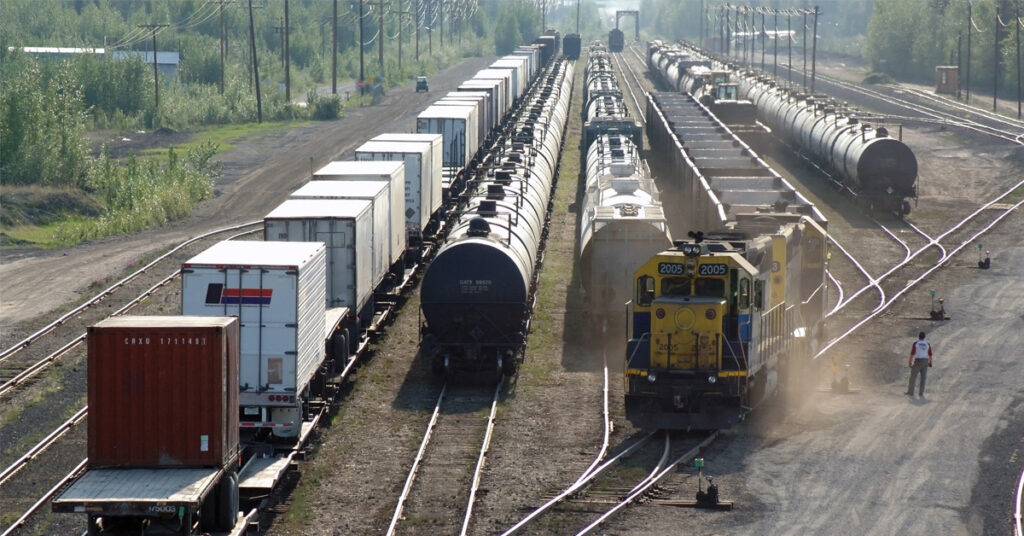 Permits can be requested on the individual railroad’s websites and normally are only for emergency situations of special transportation relief. Permits are not guaranteed but are appraised for consideration of approval.

If you receive embargoes, examine the embargo to find the issuing party. The embargo will have the contact information for the party responsible for issuing permits in the permit system; furthermore, the information will be listed on the embargo page in Railinc. You can use this information to apply with that carrier for a permit.

Preparing contingency plans can help you overcome the challenge of an embargo. Have a backup plan developed and up to date with your current rail shipping details; that way, if an embargo does appear, you are prepared instead of having to react.

When possible, try diversifying your locations and the lanes that you use to move railcars to their destination. If inclement weather and/or embargoes shut down one shipping route, and you are diversified, it is possible your other routes are not affected.