STB staying true to their promise of proactive action

On September 30th, the Surface Transportation Board (STB) released proposals for modifying the reporting of rail service data and the methodology for calculating the rail industry’s cost of capital.

One of the service data metrics that the STB requires Class I railroads to report is Cars Held.  Total Cars Held is the average number of cars in revenue service that have not moved for 48+ hours, based on daily snapshots throughout the week. The data includes both loaded and empty moves for all car types. It does not include cars placed at a customer facility, in constructive placement, placed for interchange to another carrier, in bad order status, in storage, or operating in railroad service.

Class I railroads report this information to the STB on a weekly basis. Only U.S. operations are included for the Canadian railways. Prior to March 29, 2017, the carriers reported the weekly number of cars instead of the daily average.

Railroads report this data for all manifest carloads without any differentiation between commodities.  The new STB proposed amendment stipulates that Chemicals and Plastic carloads be reported on separately from the current aggregate data.

Why is this change being proposed?  The STB received a petition from the American Chemistry Council (ACC).  According to the ACC, “STB members believe that reporting chemical and plastics traffic data would help the board and stakeholders to better detect and mitigate emerging service issues affecting chemicals and plastics shipments”.

During the CSXT’s rollout of their Precision Scheduled Railroading (PSR) in late 2017, the ACC shared that, “service disruptions have serious economic consequences. Companies whose businesses are built around rail service have been forced to send emergency truck shipments, increasing costs for both the shipper and customer. For many more companies, even this flawed option isn’t available. Delays have led to rail car shortages and forced some companies to consider adding cars to their fleet. This is the exact opposite of the benefits that CSX promised to deliver with its ‘precision railroading’ model”.  While the CSXT has made significant improvements since 2017, other carriers such as the Norfolk Southern and Union Pacific are in the middle stages of their respective transformations.

We are anticipating and encourage rail shippers in other industries to take the ACC’s lead, and request that the STB provide a breakdown on a more granular level like its current “Weekly Cars by Commodity” report.  In this report, industries are classified as: Chemicals, Coal, Food & Farm Products (excludes Grain), Forest Products, Grain, Metallic Ores & Metals, Motor Vehicles & Parts, Nonmetallic Minerals, and Petroleum & Petroleum Products.  The Class I railroads can report on Cars Held by commodity groups, so there should not be an issue in the their agreeing to this change.

The second change proposal presented by the STB involves the inclusion of an additional model to determine the rail industry’s cost of capital.  On an annual basis the STB calculates it based on a weighted average of the cost of debt and cost equity.  Key components of this methodology involve two existing models: Morningstar/Multi-Stage Discounted Cash Model and the Capital Asset Pricing Model.

The STB has proposed including the Step MSDCF model. The STB believes that including this new model in addition to the previously mentioned will “enhance the robustness of the resulting cost-of-equity estimates.”  This is especially the case whereby various railroads are making significant modification to their operational plan.

Comments on that proposed rule-making are due Nov. 5, with replies due Dec. 4.

To assist rail shippers in determining rail carriers trends and tendencies, RSI Logistics maintains a series of railroad statistics and information that can help you be more informed.  These performance charts are an example of the type of reporting that is included in our railcar management software. These charts can be filtered on the fly and downloaded in various formats. Based on your business, RSI can monitor specific events and trends and provide you with up-to-date railcar tracking information.  If interested in learning more about RSI’s proactive monitoring and railcar tracking services, please contact us. 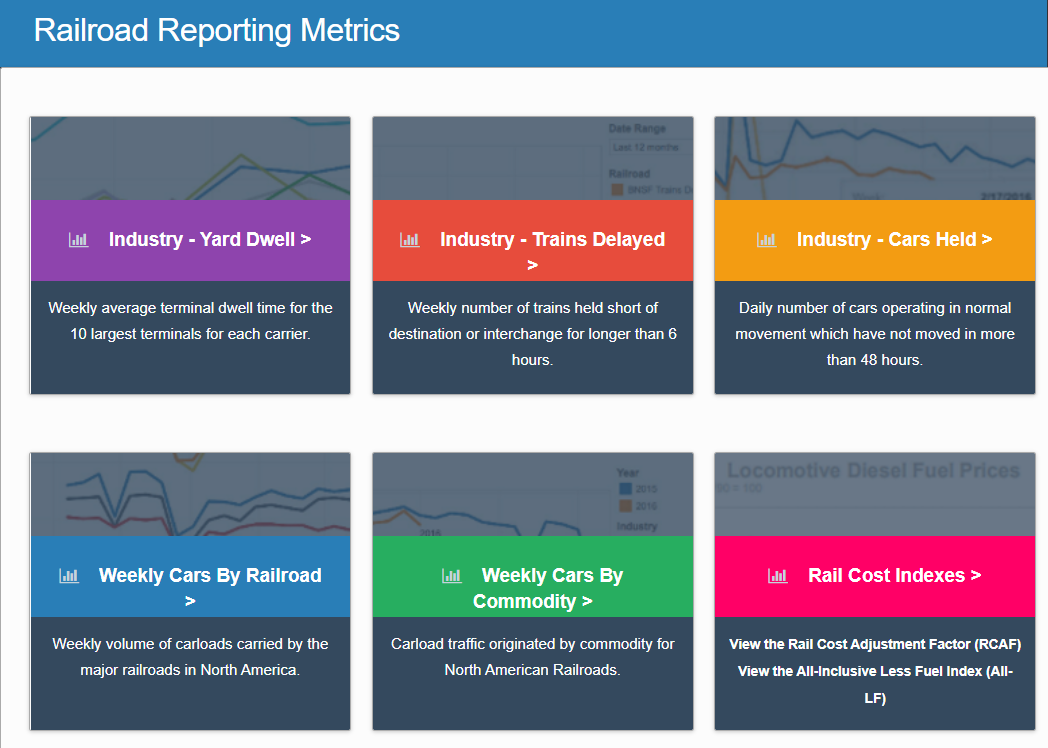