Among other concerns, the President’s Executive Order calls for sweeping reform of corporate monopolies in the areas of agriculture, pharmaceuticals, technology, and transportation. The Executive Order consists of 72 initiatives that will become the investigative focus of 12 different federal agencies. Each initiative will be overseen by the White House Competition Council that is administered by the Executive Office of the President. 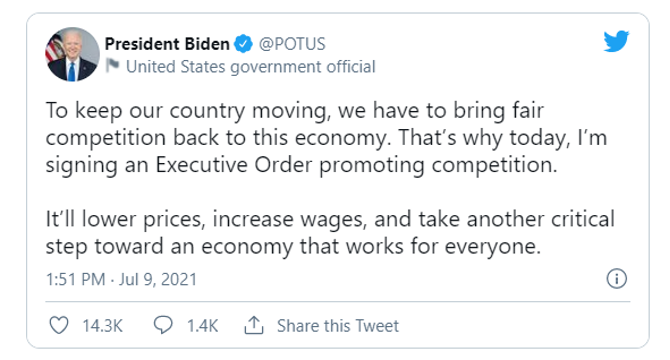 As an example of the initiatives ordered by the Executive Order, the White House Competition Council will call upon the Department of Justice and Federal Trade Commission (FTC) to investigate current and recent mergers. The target of the investigations will focus on so called “killer acquisitions” where larger entities acquire potential competitors. FTC Chairperson Lina Khan explains that further investigations will be undertaken to “ensure that the merger guidelines reflect current economic realities and empirical learning and that they guide enforcers to review mergers with the skepticism the law demands. The current guidelines deserve a hard look to determine whether they are overly permissive. We plan soon to jointly launch a review of our merger guidelines with the goal of updating them to reflect a rigorous analytical approach consistent with applicable law.”

Under Section 5 (Further Agency Responsibilities) of the Executive Order, each Federal Agency will be empowered to use their authorities to carry out the mission of the Executive Order. As it relates to rail transportation, the Chair of the U.S. Surface Transportation Board (STB) is encouraged to collaborate with the rest of the STB Board to increase competition and accessible remedies to shippers through:

Jennifer Hedrick, the Executive Director of the National Industrial Transportation League, released a statement concerning the President’s Executive Order; “The National Industrial Transportation League has long championed improvements in competition in both ocean and freight rail transportation and we applaud the Administration for recognizing that current business practices in each sector are disrupting and delaying delivery of goods and services, adding unnecessary costs for business, and ultimately creating higher costs for consumers. The issuance of this order will not only address these major challenges but also bolster American businesses. We’re especially pleased to see the Administration’s calls for vigorous enforcement toward ending unfair detention and demurrage practices that are crippling the maritime supply chain, and its request that the Surface Transportation Board proceed with the open rulemaking on competitive rail switching, originally filed by NITL with the STB ten years ago this week.”

In an interview with Yahoo! Finance, Ian Jefferies, the CEO and President of the Association of American Railroads (AAR), commented on the topic of reciprocal switching. He indicated that expanding reciprocal switching would “open up a myriad of issues”. He further mentions that the railroads have been focused on optimizing their networks to accommodate the current and continued growth in rail volume, and added that, “forced switching would undermine the fluidity of the network”. He accurately stated that the railroads invest over $25 billion a year to maintain their infrastructure, and do not rely on taxpayer funds, unlike the trucking industry. The AAR is an industry trade group that represents major freight railroads.

In a section of the Executive Order that addresses the Federal Maritime Commission, there is a direct focus on enforcing changes in detention and demurrage. We feel that this is an area that should apply to rail transportation as well. As the price of crude oil increases, which is a situation that is occurring presently, the railroads have historically re-baselined Fuel Surcharges. Through the process of re-baselining, the railroads charge a lower price per mile; however, then the difference is added to the base rate. This is nearly always a revenue-grab to raise rates, because once the Fuel Surcharges drop, the base rate does not drop. Addressing concerns such as detention, demurrage, and Fuel Surcharges in rulemakings could help alleviate the costs on shippers.

In summary, Biden’s Executive Order is nothing new by and of itself; most of what he addressed therein has always been the responsibility of each of the Federal Agencies. However, the unique aspect of the Executive Order is charging the White House Competition Council with making certain that each agency is doing their part to carry out their responsibilities to ensure fair competition.