RSI Logistics, Inc. continues to celebrate Black History Month by honoring the rail industry Pullman Porters. Despite many hardships, the porters made their mark on history in shaping a new Black middle class and were part of the catalyst in launching the civil rights movement in America.

One of the most significant achievements in the United States of America’s short history happens to be the construction of the transcontinental railroad in 1869. Its completion greatly accelerated the western movement of tourists, immigrants, and settlers. The ability to move people and materials safely and quickly from coast to coast forever changed our nation. At the same time, this infrastructure improvement opened new employment opportunities for Black Americans. 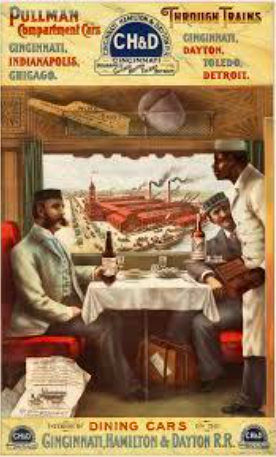 In the southern states, before and during the construction of the transcontinental lines, thousands of enslaved and emancipated Black Americans worked on the railroads. Their work consisted of performing manual labor such as grading ballast and track work, as well as building tunnels and bridges. Some, who were elevated in their roles, worked as firemen shoveling coal into the boiler of locomotives. Within the rail yards, they performed the extremely dangerous work of switching and classifying trains.

In the years following the Civil War and into the early part of the twentieth century, Black men sought employment on the transcontinental railroads, with most of their work as porters, bellhops, cooks, and maids. The Pullman (The Pullman Company) porters played a key role in defining luxury travel by rail. The Pullman porters, or simply “porters”, was used synonymously with the word “Negro”.

The Pullman porter’s pay was nominal, relying on tips received from appreciative passengers. Porters worked excessive hours and had to endure racial discrimination, even abuse; often from within the company itself, as The Pullman Company’s management would participate. Despite the exploitation and low wages, many of the Pullman porters felt their sacrifices benefited their families.

he job as a porter provided many with stable employment and offered adventure and education. The job was a significant improvement to the hard physical labor on farms and the poor work conditions in manufacturing facilities. Many porters were able to interact with passengers who shared their knowledge and experiences, and in turn the porters were able to pass along this knowledge with their co-workers, families, and communities.

The Pullman porters became an example of upward mobility for black males during the height of the company’s existence from the late 1800’s through the 1960’s. The porter’s efforts for higher pay spread quickly and resulted in the migration of hundreds of thousands of southern Black Americans to the north. The porters created the first labor union made up completely of Black Americans, making a tremendous contribution to racial reforms that followed.

Larry Tye, author, and former Boston Globe reporter wrote the book Rising from the Rail: Pullman Porters and the Making of the Black Middle Class, which depicts the life of a Pullman porter. About the Pullman porters, he writes, “They are men whose compelling biographies tell bigger stories of racial dynamics, democracy, and the building of African-America…. Behind almost every successful African American, there is a Pullman porter”.

“They are men whose compelling biographies tell bigger stories of racial dynamics, democracy, and the building of African-America. … Behind almost every successful African American, there is a Pullman porter.”

As follows is a short list of some of the Pullman porters that made their mark in history:

Asa Phillip Randolph (b. 1889 – d. 1979) – An American labor unionist and civil rights activist who, in 1925, organized and led the Brotherhood of Sleeping Car Porters (BCSP). Of his many accomplishments he was a leading figure behind the enactment of Executive Orders 8802, 9980, and 9981. These Executive Orders prohibited racial and ethnic discrimination as well as abolishing discrimination based on race, color, religion, and national origin.

Stanley G. Grizzle (b. 1918 – d. 2016) – A Canadian born judge, soldier, politician, and civil rights leader. Grizzle began work as a porter and became active in the BSCP, then following his return from service during WWII, he returned to his role in the BSCP. Grizzle was instrumental in pushing the Canadian Pacific railroad to open management opportunities to Blacks. In later years, he wrote an acclaimed book depicting his experience as a porter.

E. O. Nixon (b. 1899 – d. 1987) – An American civil rights leader and union organizer in Alabama, Nixon played a key role in the organization of the Montgomery Bus Boycott in 1955. He worked as a porter on the California Zephyr (Chicago to San Francisco) and the Capitol Limited (New York to Chicago). Martin Luther King described Nixon as, “one of the chief voices of the Negro community in the area of civil rights” and as “a symbol of the hope and aspiration of the long-oppressed people of the state of Alabama.”

Gordon Parks (b. 1912 – d. 2006) – An American photographer, musician, and film director, who worked as a porter as a young man. It is through his travels as a porter that he acquired his interest in photography. Parks became a prominent figure in photojournalism from the 1940’s to the 1970’s and most of his work focused on civil rights, poverty, and Black Americans. Parks was the first Black American to produce a major motion picture in the movie Shaft (1971).

Malcolm X (b. 1925 – d. 1965) – Malcolm X became a Muslim minister and human rights activist who was a prominent figure in the civil rights movement. Born in Omaha, Nebraska, he eventually moved in 1943 to live with his sister in Boston, Massachusetts. While there, he worked as a porter for the New Haven Railroad on Pullman cars that traveled from South Station, Boston to Washington, DC and then with the Seaboard Lines to destinations serving St Petersburg and Miami, Florida. Malcolm X’s experience as a porter had a profound impact on his future civil rights advocacy.

Oscar Micheaux (b. 1884 – d. 1951) – Micheaux was an author, film director, and independent movie producer. He produced over 44 silent and sound movies that starred Black actors and actresses and was marketed toward Black Americans. Born in southern Illinois, he moved to Chicago and found work as a Pullman Porter. His experience as a porter provided him with several contacts and allowed for a better understanding of business. His films focused on contemporary Black life and dealt with racial relationships and the challenges for Black Americans to achieve success.