We have received updates from the BNSF, CPRS, and CN railroads in regards to the significant rainfall that is impacting Western Canada. Below we have outlined these service announcements, as well as the last date they were updated.

The CP’s operations between Spences Bridge and Falls Creek, British Columbia, remain suspended following heavy rains and severe flooding that have resulted in multiple track outages. The CP currently does not have a timeline to resume operations.

The CP has deployed crews and equipment to the region, and CP engineering teams are working to repair the damaged rail corridor where it is safe to do so. In an effort to protect the operating fluidity of the CP’s intermodal terminals, the CP will not be accepting intermodal containers destined for Vancouver at any of the CP’s terminals until further notice.

BNSF is currently experiencing delays to rail operations in the region north of Seattle. Multiple track outages in British Columbia have significantly impacted interchange with Canadian carriers. An embargo is currently in effect for all freight designated to move to/from locations on the main line running between Sumas, Washington and Vancouver. 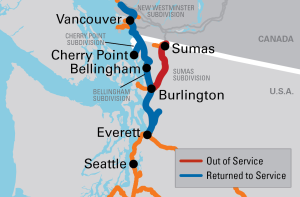 Some affected BNSF track returned to service on Tuesday, 11/16/21, while the BNSF Bellingham Subdivision running between Everett, Washington and the Canadian border fully reopened during the afternoon of Wednesday, 11/17/21. The estimated reopening of the main line between Burlington and Sumas, Washington is still pending. Conditions in the region have improved in the last couple of days; however, flooding issues in some locations may persist with the chance for additional rain in the forecast.

There has been significant rainfall in British Columbia, Canada, which has resulted in multiple slides coming off of the mountains. Subsequently, washouts have occurred on the Yale Subdivision, in the Cheam View, British Columbia area, impacting both rail and highway traffic.

All intermodal and carload traffic northbound and eastbound from Vancouver, as well as traffic inbound to Vancouver from east/north of Kamloops is affected by this situation. 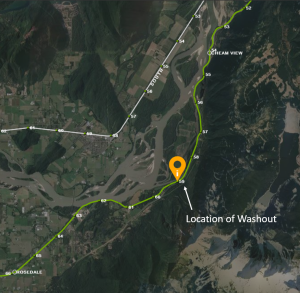 The washout is located at MP 59 (between Cheam View and Rosedale) and slide activity has also been observed overnight between MP 50 and MP 60. At this time the CN does not have an estimate for when the track will be passable.