On a daily basis we speak with shippers that are looking for ways to improve their rail transportation. The most common concern that has been coming up lately is demurrage. It’s shocking how many companies are getting monthly rail demurrage bills in the high five figures or even in excess of $100k. It is just as surprising how many times logistics managers tell me that demurrage isn’t a big issue for them, only to find out they are paying $20k – $30k per month.

Over the past several years the rail carriers have become more aggressive in their demurrage fees. In 2018, the major railroads in the U.S. collected approximately $937 million in demurrage fees. It will go up more in 2019. The two charts below show the rail volume and then the demurrage revenue for the four largest carriers. 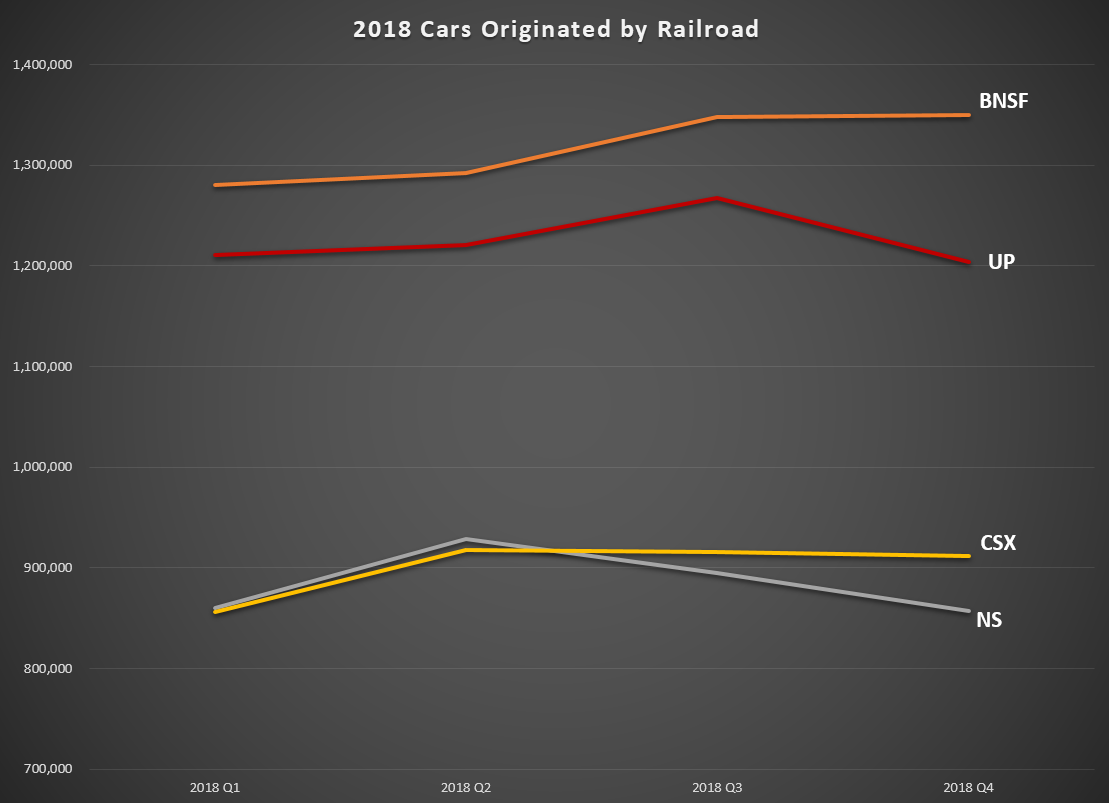 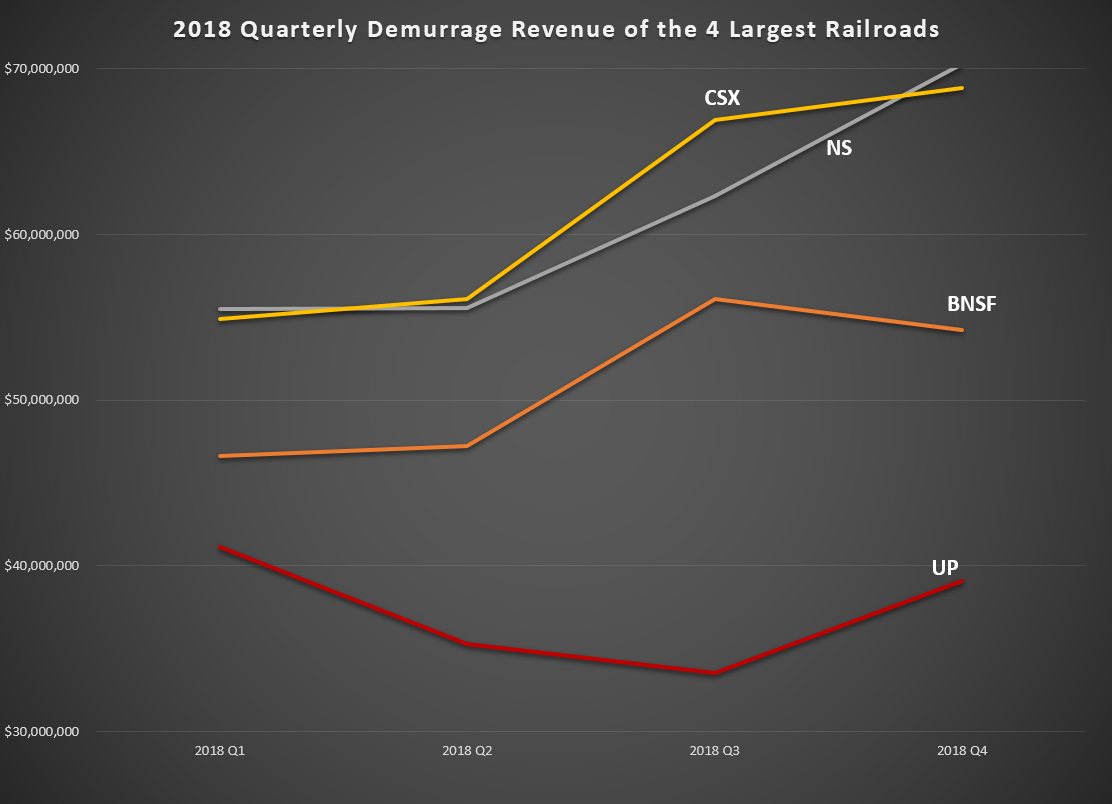 The first chart indicates that UP and NS lost market share volume in late 2018. The second chart shows that at the same time they increased their demurrage revenue. Is it their strategy to use demurrage to make up losses in freight revenue? Here is a chart of their revenue from accessorial charges other than demurrage: 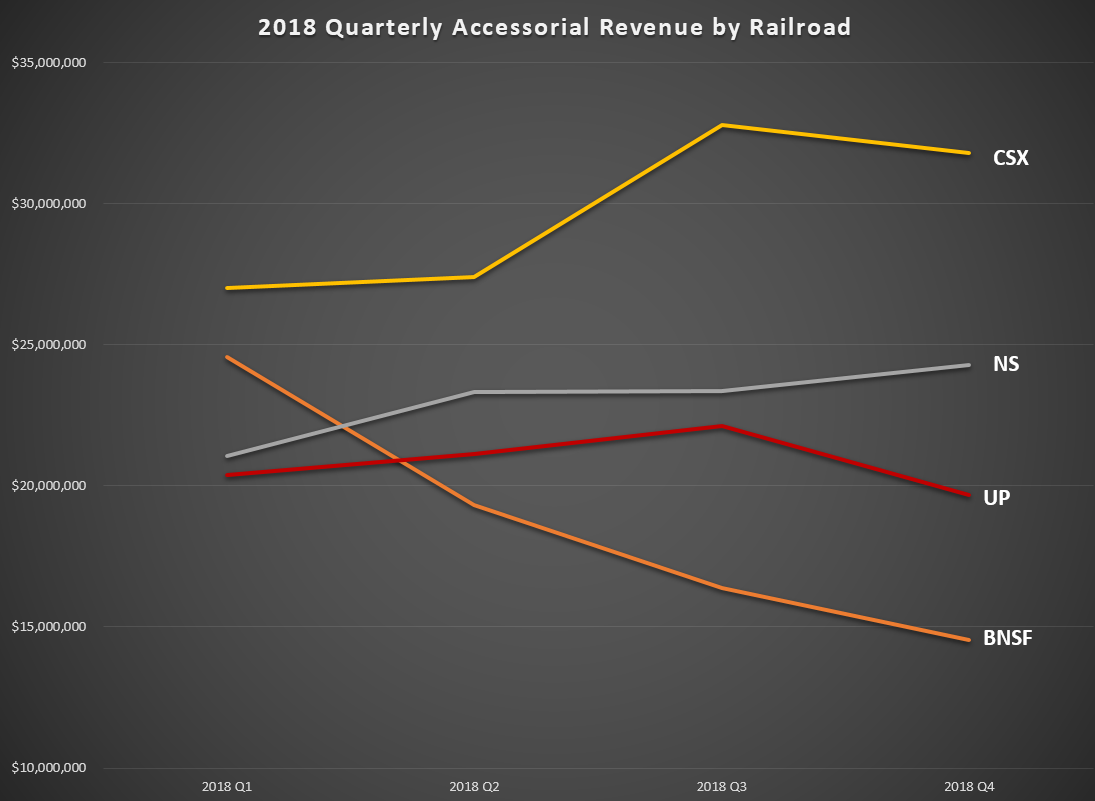 The Surface Transportation Board (STB) has taken notice. In November of last year the STB sent letters to select railroads asking them to evaluate their planned accessorial rate increases from the standpoint of commercial fairness and reciprocity. Here is an interesting excerpt from Chairman Begeman’s letter to Kenny Rocker, UP Executive Vice President – Marketing and Sales:

“I am concerned that, based on your description, UP’s tariff revisions lack appropriate reciprocity. For example, your letter states that, “if we are unable to pick up or deliver a rail car to a customer’s facility due to the customer’s action, then we will assess a charge.” The letter does not address how UP will handle situations where UP is unable to pick up or deliver a rail car due not to a customer’s actions, but rather UP’s. In this situation, it would seem appropriate for UP to offer the customer some type of credit or accommodation in return. After all, UP is expecting many customers to modify their own operations, at their time and expense, to accommodate UP’s new operating plan.”

In December of 2018 the STB sent letters to each of the railroads to disclose quarterly demurrage revenue for 2018 and 2019. And now, last week the STB announced that it will hold a public hearing on Wednesday, May 22, 2019, on railroad demurrage and accessorial charges. Railroads, shippers, third-party logistics providers, and other interested parties are invited to speak at the hearing and report their experience with demurrage and accessorial charges, including matters such as reciprocity, commercial fairness, operational and capacity issues, and effects on network fluidity.

In addition to making your voice heard on the regulatory front, there are operational changes that shippers can make to control demurrage. For instance we are currently assisting a customer implement storage yard, switching, and fleet changes that will improve service and reduce demurrage by more than a million dollars per year.

To learn more about demurrage, you may be interested in these additional resources: