Hurricanes cause more damage than any other type of weather catastrophe. These storms destroy homes and cities, as well as infrastructure. To survive a hurricane, and also to rebuild after the storm, hurricane preparedness for rail shippers is essential. The hurricane season of 2020 has already been intense, and will continue to bring more storms. Preparation and quick reactions can help rail shippers endure the season, and help damaged areas recover.

NOAA’s Climate Prediction Center is forecasting a likely range of 13 to 19 named storms, characterized by winds of 39 mph or higher. Of these, 6 to 10 could become hurricanes with winds of 74 mph or higher, including 3 to 6 major hurricanes of category 3, 4 or 5, characterized by winds of 111 mph or higher. NOAA provides these ranges with a 70% confidence. An average hurricane season produces 12 named storms, of which 6 become hurricanes, including 3 major hurricanes. According to AccuWeather, “Five tropical cyclones churned at the same time over the basin Monday [September 14, 2020] for the first time since Sept. 10-12, 1971. It is possible this record could be tied for a second time this season, or possibly broken, as some of the older systems hang on and new systems become strong enough to be given names.” 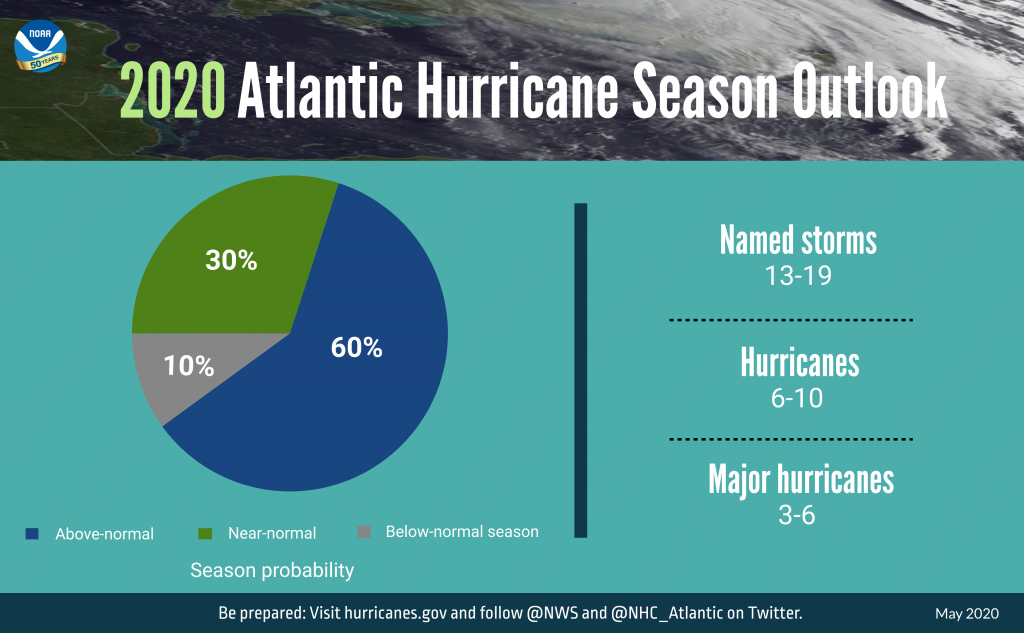 The hurricane season began in June, and a number of hurricanes have already caused billions in damages. Hurricane Hanna made landfall in South Texas, causing $875 million in damages. Hurricane Isaias hit the Caribbean, Florida and North Carolina, causing over $5 billion in damages. In August, the season accelerated with Hurricane Laura, causing $10 billion in damages and 72 deaths. A dozen other hurricanes and tropical storms have hit other areas across the Caribbean, Mexico and Central and South America. And there are likely still more storms to come. Rail shippers’ hurricane preparedness will continue to play a major role in recovery efforts and damage mitigation as the season progresses.

During hurricane season, railroads operating around the Gulf and Atlantic coasts know the importance of hurricane preparedness. They track storms to determine the most likely area of impact and evaluate the most vulnerable areas. Railroads conduct maintenance of way, stage engineering equipment, materials, and employees in critical locations in order to bring track back online as soon as possible following a storm. Ballast cars, side dump cars, and Herzog ballast cars are often positioned near a storm’s projected path. Railroad communication and signals crews forward position generators and fuel. Crossing gates may be dismantled to avoid storm damage. Culverts and ditches along the railroads’ right-of-way are inspected and cleared of any debris to ensure that groundwater is able to flow as freely as possible.

Operationally, railroads identify traffic flows and divert trains and rail cars from the area. The rail carriers also communicate with customers to assess immediate needs, with a significant focus on hazardous commodities. The railroad and shippers often will tether locomotives and rail cars that cannot be removed from the storm’s path.

When Hurricane Laura hit in late August, BNSF railroad worked to keep customers and staff informed. They issued this statement on their blog; “Throughout the week, BNSF has been preparing for the hurricane, including the activation of an around-the-clock Command Center to address any impacts to our network and direct recovery efforts that are needed. Additional resources have been staged at various locations to address track outages as quickly as possible. Our operating teams are also in communication with local, state and federal emergency personnel.”

Union Pacific made a similar statement; “Meanwhile, to prepare for the effects of Hurricane Laura — which struck Louisiana and Texas today — UP over the past few days staged resources such as generators and ballast at strategic locations, and added fueling stations and crews in the Gulf Coast area.”

Once the storm passes, rail crews assess the damage and dispatch crews to clear and repair tracks. Railroads have proven over time that they are well-prepared to anticipate weather-related events and restore operations quickly. However, all of the railroads are part of a tightly integrated network. A significant event in one part of the country can cause disruptions that ripple across the network and it may take days or weeks before the network fully recovers.

Taking steps for hurricane preparedness can help rail shippers endure the season and stay operational. Take the following actions before, during and after the storm.

Take these precautions as early as possible. These should be completed at least five days before the storm makes landfall.

In accordance with AAR Interchange Rules, customers are responsible for any damage, including flood damage, occurring to cars in their control or possession. This includes cars that the railroad has delivered to a customer’s private track or facility. AAR Interchange Rules also mandate that railcars damaged from hurricane flooding must go through a joint inspection with the railroad and customer industry. Car owner is optional.

If you suspect or see that minimum water level has reached the “RED” line, take the following actions:

Additional Hurricane Tips for After the Storm

After the storm, rail shippers will need to assess the damage, schedule repairs, update operations and work to resume rail service.

As hurricane season progresses, track the weather and conditions closely. Review current embargoes on Railinc or railroad websites to see if your area is impacted. Go through the hurricane tips for rail shippers listed above to reduce the damage and stay on top of the situation.