Tropical Storm Gordon made landfall on the Gulf Coast along the Mississippi and Alabama border late Tuesday night and the rain has moved into Arkansas at this time. As a result, flood gates in New Orleans have been lowered, allowing interchange traffic with eastern carriers to resume this morning. NS has cleared their Announcements. UP has stated they are back to normal. No official “All Clear” from KCS, but services appear normal.

The North Atlantic and Gulf of Mexico hurricane season is from June through November.  Historically, September is the most active month for tropical storms and hurricanes that impact the U.S. and Mexico.

Right on time, Tropical Storm Gordon formed early Monday morning as winds strengthened to 50 mph sustained as of 4:30 p.m. (Eastern) Monday afternoon. After crossing over the southern tip of Florida Sunday night, TS Gordon is expected to track to the northwest, with landfall Tuesday night near the Pearl River on the coasts of Louisiana, Alabama and Mississippi.

The most recent forecast anticipate TS Gordon to strengthen to a Category 1 Hurricane status shortly before making landfall Tuesday night. Hurricane warnings have been issued for those coastlines expected to be affected by Gordon. 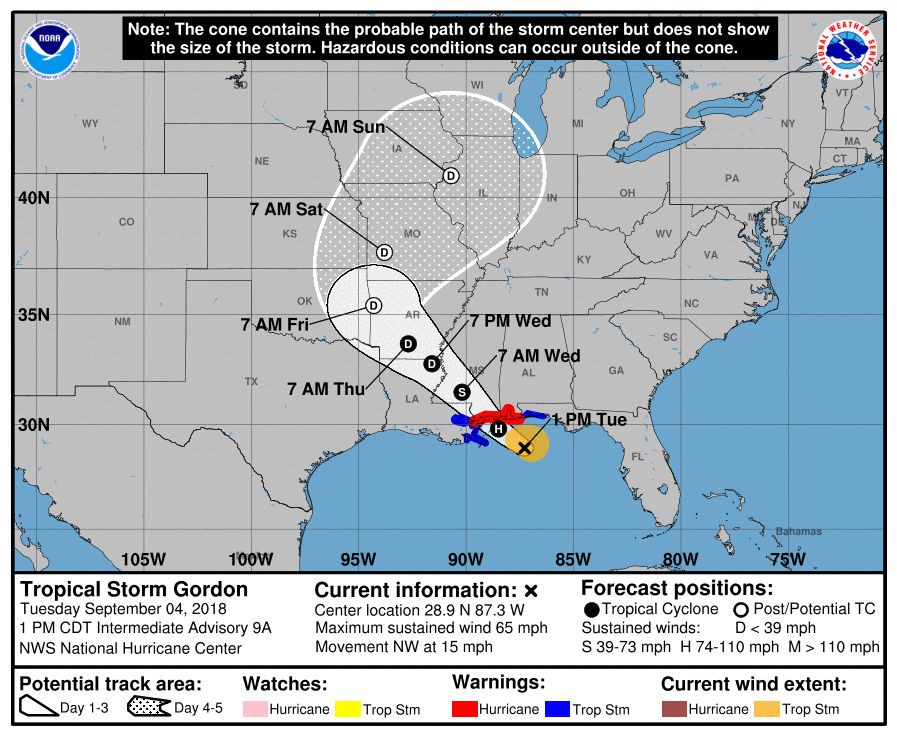 We have been monitoring all of the railroads that operate within and around the projected path of Gordon.  As of Tuesday afternoon, the rail carriers have reported the following:

KCS [9/4/18] KCS is monitoring the weather and will provide any updates should closures occur at or near the NOLA port or on our network. In anticipation of the storm, arrangements are being made in and around New Orleans that may impact rail traffic starting later today.

NS [9/4/18] Norfolk Southern is monitoring Tropical Storm Gordon’s path towards the central Gulf Coast.   Precautionary actions are being taken to protect infrastructure, and rail equipment is being repositioned away from the low lying areas.  Shipments typically interchanged over New Orleans are being detoured to alternate gateways.  Norfolk Southern is working with customers located in the forecasted region to identify switching needs.

NOPB [9/4/18]: The New Orleans Public Belt has suspended work for their 2nd and 3rd shift employees beginning today (9/4) and is anticipating to resume work on Wednesday morning (9/5).

Oddly absent from releasing information are the CSXT and the Canadian National.