The Canadian Pacific Railway (CP) and Kansas City Southern (KCS) announced that both Class I carriers have entered into an agreement to merge. The initial conditions of the merger stipulates that the CP will acquire KCS stock amounting to $29 billion and will assume the KCS’s outstanding debt estimated to be approximately $3.8 billion. As a combined rail network, the proposed new name will become known as the Canadian Pacific Kansas City or CPKC.

The CPKC will seek approval by the Surface Transportation Board (STB). Assuming the merger is approved, the CPKC will become the first rail network that combines single line rail transportation service covering Canada, United States and Mexico. 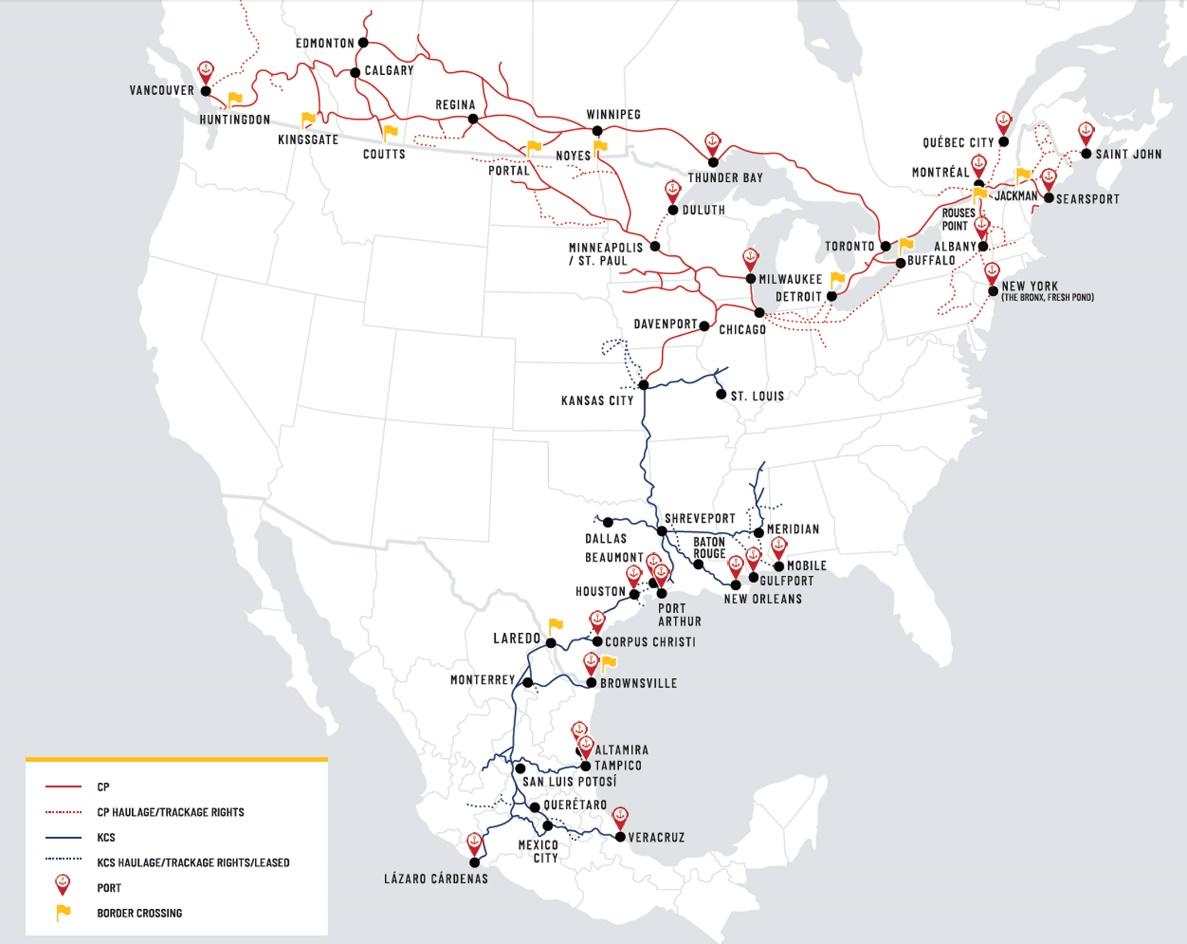 Once approved by the STB, the CP will assume control of the KCS. CP’s CEO Keith Creel will serve as CEO of the CPKC. CP’s current headquarters in Calgary AB will become the CPKC’s global headquarters with the current KCS headquarter in Kansas City being designated as their US headquarters.

Exactly how will this change up the current hierarchy of the “soon to be” six Class I railroads? Looking at each carrier’s performance in 2020, the CPRS and KCS were the two smallest of the Class I’s in terms of revenue and volume. 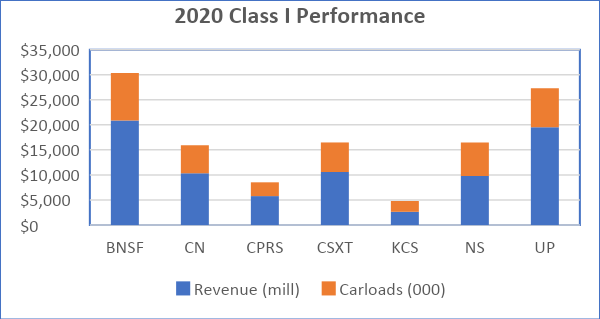 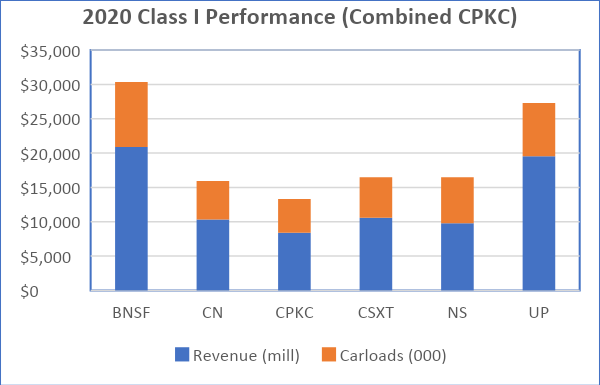 Once combined, the new CPKC will remain the smallest Class I railroad based on 2020 results, falling just short of the Canadian National (CN). Will the newly combined network draw additional synergies that produces results greater than simple addition? We think so.

The passage of the North America Free Trade Act in 1994 eliminated and/or greatly reduced trade barriers between Canada, US and Mexico. As trade lanes opened, the CN acquire the Illinois Central in 1998 thereby extending the CN’s reach from Chicago to the US Gulf. The move also provided CN access to the KCS through such interchanges as East St Louis IL, Memphis TN, Jackson MS and New Orleans LA. The CN and KCS went on to develop an alliance that was marketed as the “NAFTA Railroad”. Through this alliance, the CN was able to price to Mexico as if it was one seamless railroad. With the CP-KCS merger, there more than likely will be some current CN-KCS business transitioned to the combined CPKC with the bragging rights of being the “NAFTA Railroad” shifting to the CPKC.

Last year there was considerable concern about the termination of the NAFTA agreement. Many Class I carriers were extremely vocal about the negative effects of new trade restrictions. The KCS was without question one of the most outspoken. In early 2020, then-President Trump approved the US-Mexico-Canada Agreement which essentially was an update and rebalancing of NAFTA and has not imposed any negative impact to North America’s railroads.

As most seasoned rail shippers remember, Class I railroad mergers typical involve a significant amount of service disruptions and come at the price of diminished competition on some routes. Previous mergers involving the Union Pacific-Southern Pacific and the Atchison Topeka & Santa Fe-Burlington Northern came with service problems that took years to resolve. Both mergers involved parallel operating railroads that shared the same geography. The complicated breakup of Conrail and its extensive Northeast operations was equally as painful.

A CP-KCS merger on the other hand is different in that it will be an end-to-end merger, with no overlap in operating geography. The CP and KCS essentially meet at one point, Kansas City. A CP-KCS merger should make it easy for regulators to approve as compared to the previously mentioned consolidations.

The CP and KCS’ current service performance metrics are in a very good place as compared to the rest of the rail industry. RSI maintains various service metrics that includes Yard Dwell, Train Delays and Cars Held. These can be found at /resources/railroadperformance/.

The new CPKC network should be welcomed by many rail shippers. This is especially true in the agricultural and automotive business segments. In 2020, Canada exported $1.8 billion in agricultural commodities such as Wheat and Canola to Mexico. On the automotive side, exports accounted for $1.7 billion.

Below is an example of RSI’s Rail Impact® application that identifies rail costs and provides benchmark rates for both competitive and non-competitive movements. In a hypothetical manifest movement of wheat from Thunder Bay, ON to Mexico City, DF the current routing maybe CN-JACKN-KCS-LARED-KCSM. The theoretical rail cost is $ 7,491 per car and 31 days roundtrip transit time. The alternative routing of CPRS-KCITY-KCS-LARED-KCSM yields a cost of $ 8,299 per car and 31.6 days roundtrip transit. The proposed CPKC system should greatly reduce the current CPRS-KCS cost making it more cost competitive than a CN-KCS routing. The ability for the CPKC to operate “thru” trains through Kansas City will only improve transit times. 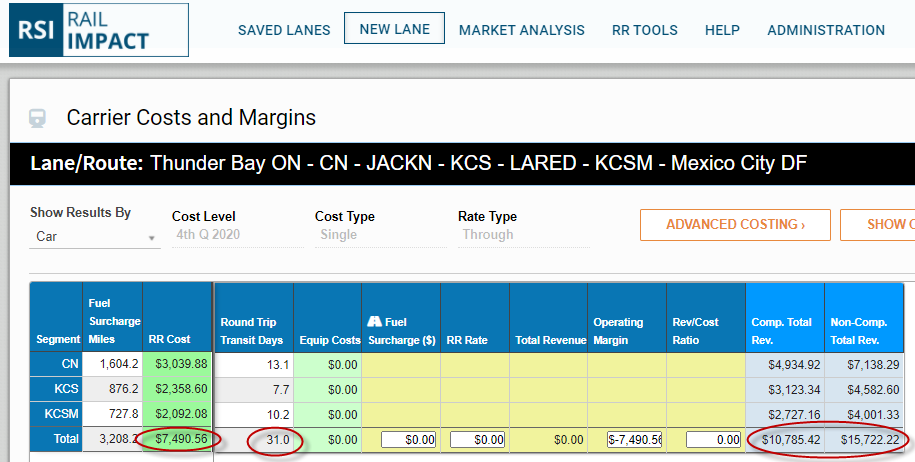 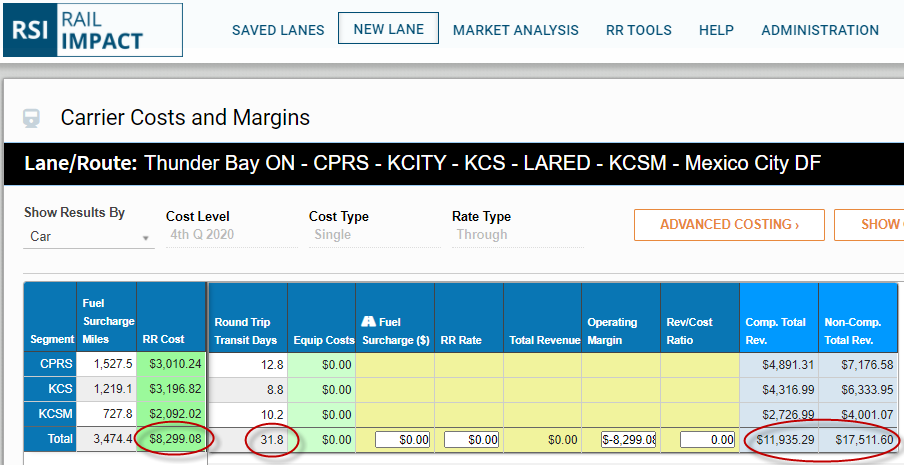 Taking a hypothetical look at the movement of finished autos from Rojas CU to Toronto, ON the current routing may be KCSM-LARED-KCS-JACKN-CN. The theoretical rail cost is $ 7,337 per car with a 19.1 day roundtrip transit time. The alternative routing of KCSM-LARED-KCS-KCITY-CPRS yields a cost of $ 7,574 per car and 18.9 days roundtrip. Even though the KSC-CPRS routing has a slightly higher cost, it would be fair to say that when consolidated, the CPKC direct movement would yield a significantly lower cost and deliver on improved transit times. 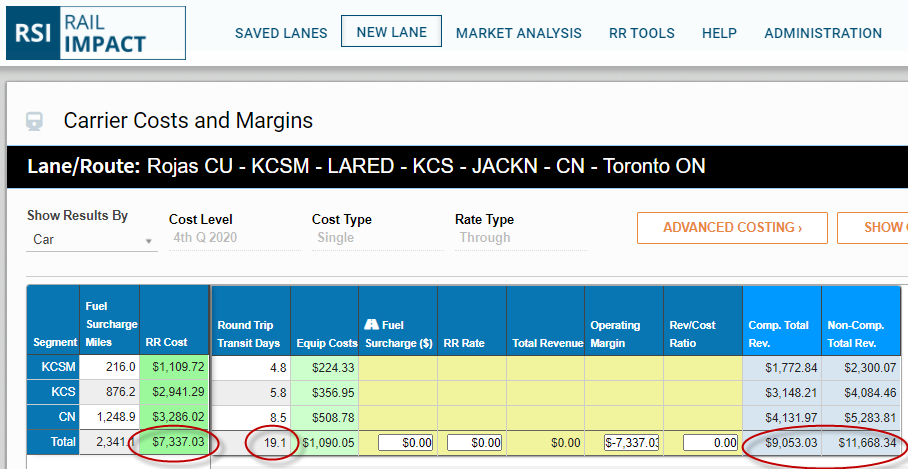 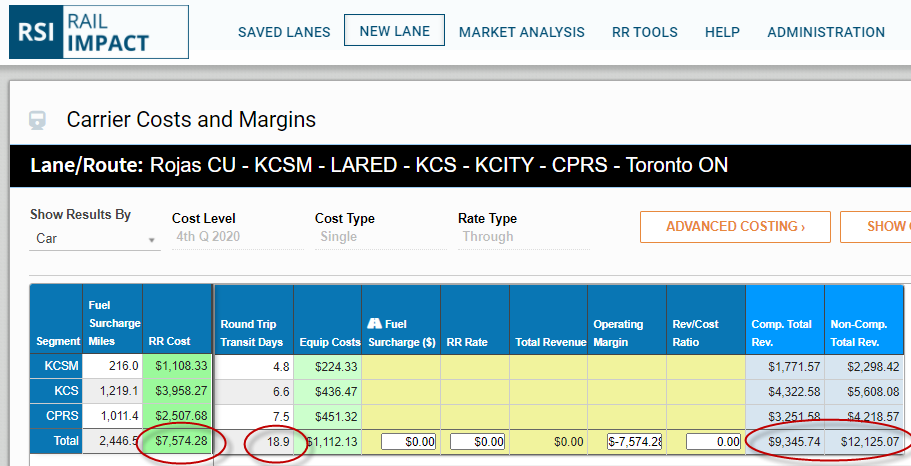 There will no doubt be resistance from other Class I railroads, but it appears that a CP-KCS merger should be successful. Shippers who are engaged in automotive, agriculture, energy and lumber should be very excited about the possibilities.

To better understand your options and how RSI’s rail costing and rate benchmarking application, Rail Impact can provide you with the information to take advantage of this pending merger, please contact our VP of Marketing, Linda Glauber.